Intrusion Testing in Formula One

The Importance of Intrusion Testing in Formula One

While there’s no doubt that danger is an element of Formula One racing, it’s the regulation and implementation of innumerable death-defying safety features that make the sport so incredible. For F1 vehicles to race on the circuit, they’re required to pass a number of strict static and dynamic crash tests specified by the FIA.1 An important element of this testing is that the chassis is able to resist impact and intrusion from other objects. In this article we take a closer look at the importance of intrusion testing and how Testometric’s 600kN FS testing machine is used to ensure driver safety in Formula One. 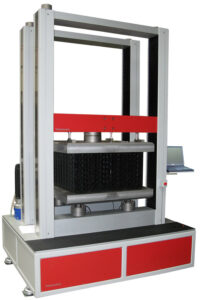 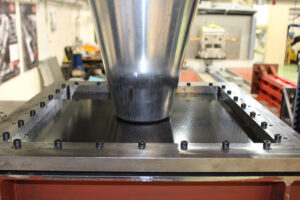 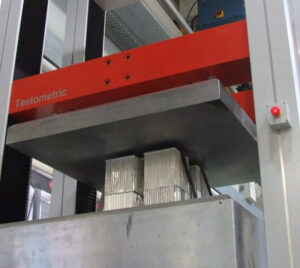 In August 2018, Swedish Formula One driver Marcus Ericsson lost control of his vehicle at 220mph and veered into a crash barrier.2 Onlookers saw the car rapidly disintegrate as it barrel-rolled three times before coming to a stop. To someone unfamiliar with F1, what happened next was perhaps even more shocking: Ericsson was able to speak to his team over the radio – “I don’t know what happened there. I’m okay.” – and after being helped from his car by marshals, limped to Monza’s medical centre for a check-up.

It would be hard to overstate the differences between today’s Formula One and the 1950’s sport bearing the same name. While the actual rules of racing have undergone their fair share of revisions, the most dramatic of these differences is certainly safety: once an afterthought, driver safety now lies at the core of Formula One regulations and ethos. A modern F1 chassis is constructed around the driver’s ‘survival cell’, the features of which are meticulously engineered to protect the driver from virtually any conceivable threat.

The mechanics of impacts and their effects on the human body have been exactingly measured and characterised, and today’s Formula 1 cars are required to pass a stringent series of crash tests before being deemed fit for use. As a direct result of these measures – and the considerable engineering prowess implemented to meet these requirements – it’s not uncommon for drivers like Ericsson to walk away from crashes at triple digit speeds with nothing more than a sprained ankle.

Intrusion testing of the chassis is a crucial part of crash tests, devised to ensure that the monocoque can’t be penetrated by other objects such as crash barriers and other vehicles. Most Formula 1 intrusion testing is carried out by the Cranfield Impact Centre in the UK3, an international respected test facility with approvals from the FIA and VCA. Cranfield Impact Centre perform tests to support F1 teams, automotive, medical and military industries.

Needless to say, the level of precision required by the FIA necessitates the use of cutting-edge testing equipment. The intrusion testing team at Cranfield carry out their intrusion testing with the help of Testometric’s 600kN CT universal testing machine, a floor-mounted unit capable of delivering enormous force in a tightly controlled manner.4,5 Testometric provided installation of software and hardware as well as yearly servicing and calibration.

In these tests, a sample panel of chassis material manufactured by an F1 team is mounted onto the base of the testing machine, and a cone-shaped intrusion tester is slowly and precisely driven into it. Multiple synchronous data streams record detailed measurements of intrusion and force to ensure that the sample meets FIA standards.

In order to pass, the chassis panel must be able to withstand 250kN of force – roughly the same as the force provided by a Boeing 747 engine – distributed through an impactor six inches in diameter.6 The chassis material must also be able to absorb a considerable amount of energy from intrusion tests – while it is possible to make a chassis incredibly hard, it must exhibit some level of flexibility in order to reduce the risk of driver injury. In the intrusion test, an FIA-approved chassis sample must be capable of absorbing 6kJ of energy within the first 100mm of deflection.

Capable of delivering a controlled force of up to 600kN, the FS600 CT testing machine is both powerful and versatile enough to meet the demands of F1 intrusion testing.  Digital AC servo drives and brushless servo motors provide high precision testing, with speeds from 600mm/min down to 1µm/min in steps of 1µm/min. High stiffness loading frames with specialised steel crossheads and rigid extruded support columns provide a robust and accessible open-sided frame with T-slots for accessory mounting.

The level of engineering and expertise that goes into testing each 0.3m2 panel of chassis material is a testament to the evolution of F1 and the culture of safety that has developed within the sport.

Testometric’s FS600 CT testing machines are fully digitised with high precision controls and are easily configurable for cyclic and complex multi-stage test procedures. In addition to 4 high-speed data collection systems, there are 6 I/O channels for additional devices such as extensometers and micrometers.

Testometric manufacture a range of high-performance mechanical testing machines for laboratories, production lines and research establishments in over 100 countries.

By continuing to use the site, you agree to the use of cookies. more information